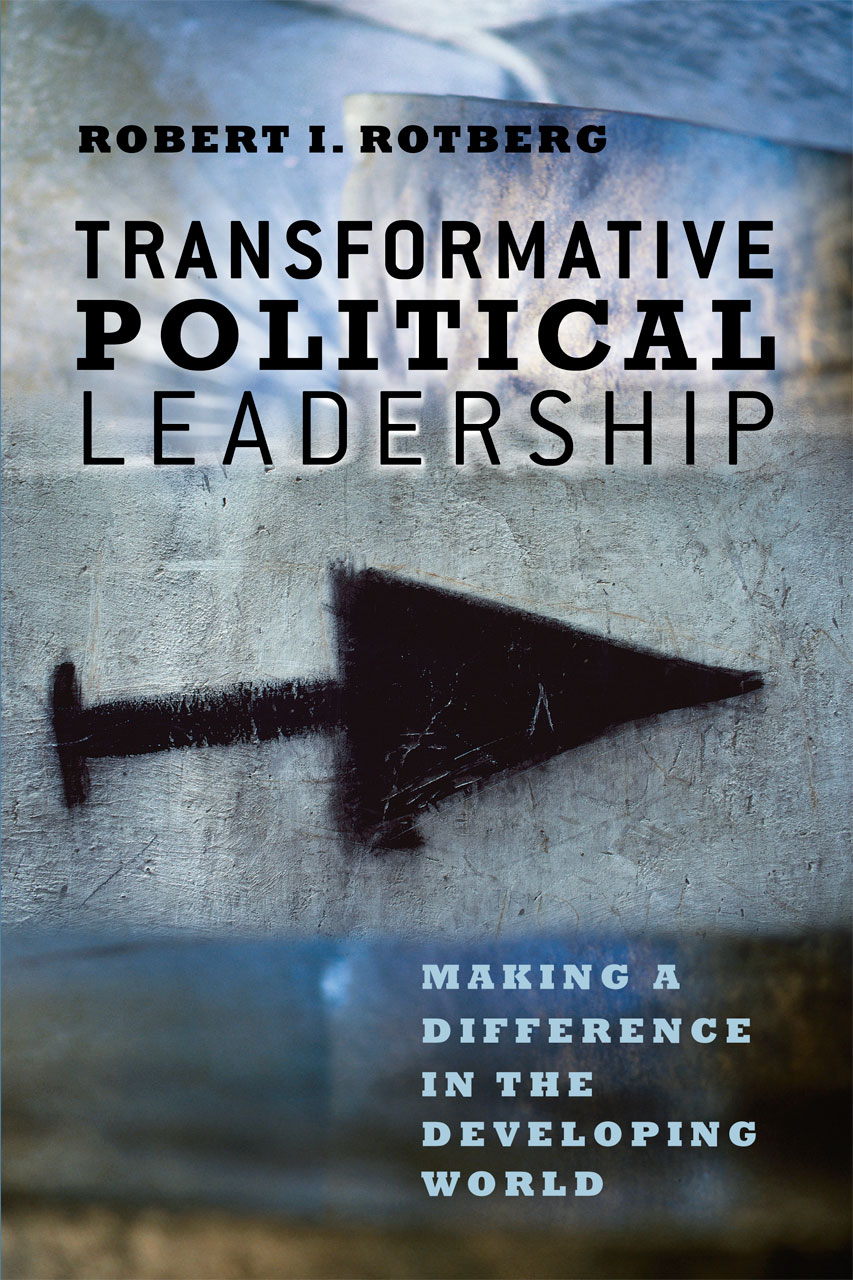 Despite the insightful analyses and research relating to this subject, leadership theorists and scholars are far from presenting conclusive or concentric leadership models. However, Robert I. Rotberg makes a spirited attempt in this 2012 tome. He suggests that there are core leadership competencies that may be observed in all effective leaders. He reveals five core competencies; ‘the vision thing’, ‘the mobilization momentum’, ‘being legitimate’, ‘gaining trust’ and ‘the enlarged enterprise’. He argues that these are “the identifiable competencies that are the behaviors and skills that followers look for in their leaders”. He attempts, with considerable success, to present these competencies through an analysis of four iconic leaders of the developing world.

Right from the title, readers are thrust into the modern day leadership discourse without as much as a welcome note, almost as if it had begun in the middle. Rotberg, himself a leadership aficionado, begins his discussion with much fanfare and a seeming urgency to get to the core message of the book by highlighting the lame leadership of South African president Jacob Zuma, one of the supposed countries that have felt the positive effects of visionary and consummate leadership in Nelson Mandela. He makes a summary and clear delineation of outstanding political leadership in the developing world through the use of the two terms: ‘Transactional’ leadership versus ‘Transformational’ leadership. Quoting Rosabeth Moss Kanter, he outlines the basic differences of political leaders as ‘oversight on the technical and functional aspects’ against the ‘dynamic efforts to shape the direction’ of the nation.

Rotberg notes, and rightly so, the near-overwhelming emphasis on institutions when it comes to the study of leadership, something he seeks to challenge throughout the course of his book. Further, with the exception of a few biographies of presidents and statesmen, he exposes the gap in leadership studies early in the text. He avers thus; “the dominant examination of leadership focuses mostly on corporate and organizational leadership. It is instructive and draws heavily on the examples of successful and less successful chief executives”. The book essentially argues that in the developing world, greater attention should be paid to leadership as to institutions. Transformational leaders have helped to build nations and institutions, sometimes from scratch, and help to shape political cultures as well as “breathe life into institutions”

The following is a brief discussion of the main ideas as contained in the book;

According to Rotberg, the outcomes for the people of the developing world depend to a great extent on not just the political leadership decisions, but also their actions. He argues that even though the traditional emphases are on the primary salience of structures, individual agency matters. Indeed he is not short of examples in making this particular point as he mentions, among other leaders, President Robert Mugabe of Zimbabwe who in the 1980’s and 1990’s,  inherited constitutional limitations and strong institutions from his British and Rhodesian colonial predecessors. The concomitant outcomes for the citizens of Zimbabwe in terms of development as we know are currently far from good. Rotberg insists that even the colonial legacies and affiliations do not matter when it comes to outcomes and notes that comparisons of imperial examples [Dutch, British, French, Belgian, etc] and that subsequent leadership makes all the difference and is indeed an ‘independent variable’ when it comes to human outcomes. He presents five identifiable behavioral leadership competencies;

The first core competency as discussed in the book is vision. While not an entirely new or an esoteric quality of leadership, the ability to sustain and project a vision for the nation is central to all effective leadership. This is the one competency that can be [clearly] seen in all the effective political leaders discussed in the book and Rotberg himself concedes in the closing pages that the original title of the book was ‘The Vision Thing’. Such leaders, Rotberg argues, have a grand but simple plan, deal in destinies, dreams and ultimate purposes, but even more importantly, are able to “urge their citizens to join them on the farthest, most promising shores”.

Secondly, Rotberg postulates that a compelling vision is in itself insufficient. The ability to activate a following, and with direction and urgency is crucial to leadership. This may seem obvious enough, but Rotberg makes the point that without it, leadership is moribund. He calls this competency ‘the mobilization momentum’. Admittedly some of the leaders discussed like Ataturk, seem to have lacked this quality and employed a considerable level of autocracy to sell his vision. The third core competence is ‘being legitimate’. The book insists that all leaders need to be regarded as legitimate by the citizenry if they are to have strong leadership. Rotberg argues that legitimacy decisions, perceptions, and judgments are primarily made by the followers. According to him, even Nelson Mandela with his incredible legitimacy before he took over the reins of South Africa understood that legitimacy was his to lose, thereby placing each of his magnanimous actions on the scales of followers’ legitimacy judgments. This added followers’ backing and his legitimacy was thus burnished. He concludes by highlighting the common confusion of authority with legitimacy and that leaders must occasionally look over their shoulders to deliberately preserve their legitimacy.

Fourth is the core competence of ‘gaining trust’. Rotberg argues that this particular competency is a synthesis of the first three competencies [vision, gaining momentum, and legitimacy] in that, they work towards establishing trust. He briefly describes how they can accomplish this; “… by acting consultatively, democratically and ethically; by acting in a disinterested self-sacrificing manner; by being authentic; by embracing and fulfilling the aspirations of their peoples; and by concerning themselves with the needs of their followers rather than their own self interests.” [pp. 34]. Quoting Warren Bennis, Rotberg insists that trust, and especially reciprocated trust, is the emotional glue that binds followers and leaders together and is the foundation of the critical social contract. Lastly, Rotberg argues that supplying a sense of purpose and belonging [to an enlarged enterprise] towards a realization of full self-worth by the followers is key leadership competence. He crystallizes this particular leadership competency in his discussion of the four leaders, especially Lee Kuan Yew and Kemal Ataturk. Transformational leaders inspire and uplift their followers and under their authority, they will cause them to believe that they have a real stake in their country.

According to Rotberg, these are the identifiable core competencies of transformational leaders in the developing world within which the book is based. He supports them through his less than detailed analysis of the four leaders that have shaped the positive outcomes of their respective nations. He alludes to a number of other qualities, though he does not spell them out in detail. They include prudence, self-mastery, courage, integrity, empathy, emotional awareness, and charisma. He warns of the traditional view of leaders who possess these qualities as ‘charismatic’. Rotberg makes the point that charisma is hardly a factor of good leadership because it is more of a social phenomenon than it is an individual trait. He avers thus, “the use of charisma as a concept hardly helps us to explain differential political leadership success or failure”.

The iconic leaders, the primary case studies, are Nelson Mandela of South Africa, Seretse Khama of Botswana, Lee Kuan Yew of Singapore, and Kemal Ataturk of Turkey. They are discussed as narratives, much in a biographical fashion and in no chronological order. It is through these examples that Rotberg presents the central idea of his book namely; the individual agency matters. The fact that these leaders expressed their skills or competencies in different contextual backgrounds further reinforces Rotberg’s conclusions on the identifiable core competencies. He refers to Nelson Mandela as a ‘consummate inclusionist’, Seretse Khama as a ‘resolute democrat’, Lee Kuan Yew as a ‘systematic nation-builder’ and Kemal Ataturk as an ‘uncompromising modernizer’, an attempt to capture the different contexts & circumstances within which they applied themselves. But more importantly, Rotberg succeeds [through these examples] in showing that certain competencies of transformational leadership, despite unique and distinctive challenges, cuts across different environment, cultures, and even time.

Rotberg conclusively notes that Iconic and transformational leaders are synonymous with continued reverence of their accomplishments and continue to have and draw followers. Further, even debates on contemporary stalemates and issues tend to draw upon ideas and actions that were taken by the preceding transformational leaders in the formative years. Nevertheless, Rotberg highlights the fraught process that is the transition from the founding leaders to his successors. Even the presence of stability does not guarantee the success of newer leaders. “…newer leaders may pale by comparison, whether because of the transactional – seemingly mundane – nature of his or her responsibilities or because of his or her own personal limitations”. Nelson Mandela’s successors in South Africa may, according to Rotberg, be considered to have foundered compared to the other three, watering down much of his legacy by ignoring key leadership lessons.

Transactional leaders constitute the bulk of heads of states in most of the developing world nations today as Rotberg insightfully observes. They are often the ‘closet autocrats’ as he refers to them and who “find it hard enough to preside, much less with vision and integrity”. In a seemingly subjective tone, Rotberg contends that the leadership in many developing societies is stuck in a “transactional trajectory” even when democratically elected into office and despite the loud cries for transformational leadership in those societies. According to Rotberg, transactional leaders constantly worry about getting re-elected are more focused on managing their followers than leading them or trying to embolden them.

‘Transformational Political Leadership’ hardly brings any new concepts into leadership studies but instead a fresh insight into the role of political leadership, and particularly the aspect of individual agency when it comes to leadership and the success of a nation. Despite the use of the particular four credible cases to convey the central idea of his book, Rotberg admits that their experiences are singular and in no way representative. Indeed the autobiographies of these four leaders may be more informative, as far as their competencies are concerned, than what Rotberg has detailed in the book. However, he illustrates the key and common competencies that have made all the difference as far as positive outcomes are concerned. He boldly presents these core competencies throughout the text, albeit with glimmers of contradiction [authoritarianism in Lee and Atartuk as contrasted with democracy and inclusivity in Mandela and Khama].

Despite a paragraph in the closing pages coupled with sporadic allusions of a conclusive way forward for the political leadership in the developing world, the book hardly offers any hard and fast rules on practical leadership. It instead calls out for the need to re-think our fundamental perspectives on political leadership. The text is particularly helpful in contributing to the great leadership question; are leaders born or are they made? Nevertheless, students of leadership studies and scholars alike will be impelled to consider the impact of one individual in a society. In the same light, stakeholders will gain fresh and provocative insights as they develop ‘alterative’ strategies in response to the prevailing leadership crisis in the developing world.